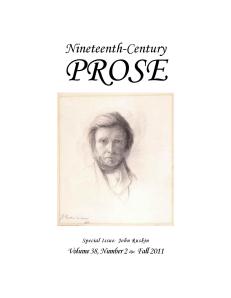 Sara Atwood, “”The things that lead to life’: Ruskin and Cultural Value”

Ruskin’s understanding that “A truly valuable or availing thing is that which leads to life with its whole strength” underpins his thinking about culture as well as the uses he makes of it. His concept of life is drawn from the richness of experience generated by looking, drawing, thinking, and reading. In his books and social schemes, Ruskin sought to extend this vital culture to others, that they too might learn to see clearly and to live richly. Ruskin’s sense of cultural value, as this introduction argues and as the essays collected in this volume attest, is worthy of attention not only because of the influence his ideas exerted in his own day, but for what we stand to learn from them today.

Clive Wilmer, “Ruskin and the Challenge of Modernity”

Ruskin called his first book Modern Painters, and made his name by establishing a visual aesthetic for the modern age. By the time he reached middle life, however, it was not altogether clear whether he spoke for modernity or for reaction. Was Unto This Last, his attack on the Political Economists that he published in middle age 150 years ago, the protest of an outraged conservative or the blueprint for a new sort of society? It was followed by a succession of attacks on key figures in the transition to a fully industrialized and secularized society: notably on Whistler and Darwin. By the end of his career, he was speaking of Kate Greenaway as if she had been a painter of Turner’s stature. This paper will argue that Ruskin’s apparent ambivalence is a mark not of uncertainty but of dissent: an attempt to define a distinctive course in the understanding and measure of cultural value.

Alan Davis, “Misinterpreting Ruskin: New light on the ‘dark clue’ in the basement of the National Gallery, 1857-58”

It has been suggested that Ruskin’s discovery of erotic drawings by Turner, during his work on the Turner Bequest in 1857/58, brought on a major crisis that was “the real turning point” of his life. If correct, this affects our perception and understanding, not just of Ruskin’s life, but also of his work from 1858 onwards. Like the compulsive attention given to Ruskin’s marriage, and to his supposed paedophilia, the story of Ruskin and the erotic drawings tends to distract attention away from the cultural value of his work, and therefore a particularly careful examination of the case for its significance is necessary. This paper approaches the problem from a new perspective, by focusing on Ruskin’s little-known attempts to edit some of Turner’s finest compositions in the fifth volume of Modern Painters, and by seeking an explanation for these activities through his work on the Turner Bequest. Using images available online (and elsewhere) of sketches in the Bequest, it is possible to recapture something of what Ruskin saw in the basement of the National Gallery, and to seek to understand what it was that led him to dismiss a large proportion of sketches in the Turner Bequest as “entire rubbish.” Following the implications of that enquiry, this essay argues that Ruskin’s rejection of these drawings can be understood purely in terms of Ruskin’s known attitude to what he considered to be inferior art; that this provides a full and adequate explanation not only for the anomalies in his etched illustrations, but also for the darkened and disillusioned perception of Turner that found expression in Modern Painters V; and that in terms of understanding Ruskin’s life and work, post-1858, his encounter with Turner’s erotica may be much less important than has been supposed.

John Ruskin’s Introductory essay to The Harbours of England (1856) is a text grounded on the aesthetics of Romanticism that is significant for its views of human labor and collaborative enterprise. In The Harbours Ruskin expresses hostility and opposition to various key concerns of Victorian modernity.

Mark Frost, “Of Trees and Men: The Law of Help in Modern Painters V”

Examining “The Law of Help” and “Of Leaf Beauty” from John Ruskin’s Modern Painters V (1860), I argue that Ruskin used both bot-any and aesthetics to pursue an organic conception of organization and creativity, and attempted to articulate a vision of harmonious order that could be equally applicable to art, politics, and society. Ruskin’s belief that composition consisted in the mutual relationships of parts within a whole was founded on his reading of environment and then applied to human concerns, making his work a site of proto-ecological and biocentric enquiry. However, at the same time his natural history was also marked by commitment to anthropocentric notions of hierarchy and design. The co-existence of these competing visions of environment made Ruskin’s natural history a realm of tension and unresolved conflict, but also generated a unique conceptualization of nature that he sought to apply to politics. Through the botanical narratives of “Of Leaf Beauty” Ruskin created the most extended and profound of his social-environmental analogies, insisting that the “building” of trees rested on the sustained fellowship of leaves that are guided by an innate sense of duty, purpose, and cooperation. An extended example of the Law of Help in action, “Of Leaf Beauty” was motivated by clear political purpose. By analyzing Ruskin’s later political work  in the theoretical realm of Unto This Last (1862) and in the practical arena of the Guild of St. George – I argue that the dual impulse of his natural history is writ large in his social thought. I also suggest that he was unable to translate the unreflexive communitarianism of the tree communities of “Of Leaf Beauty” into the field of utopian praxis, and that the Guild was caught between commitments to hierarchy and to decentralized interdependence.

Peter Yeandle, “Art, Ethics and Pleasure: The influence of Ruskin on the Rev. Stewart Duckworth Headlam”

Much has been written on John Ruskin’s influence on late nineteenth-century British socialism in general, and on Christian Socialism in particular. However, little has been said about Ruskin’s influence on the Reverend Stewart Duckworth Headlam (1847-1924), one of the founding fathers of the Christian Socialist “revival” in late Victorian London. One of the most colorful and controversial preachers of his period, Headlam stood bail for Oscar Wilde, took the platform with Irish Nationalists campaigning for Church disestablishment, and acted as character witness for high-profile secularists. His passion for the theatre, and ballet in particular, was met with consternation by his religious superiors and mockery by the popular press. Headlam’s defense of the performing arts and the sacred vocation of artists drew from Ruskin’s doctrines of beauty and meaningful labor. Although controversial, Headlam was also sincere, committed, and dedicated to the welfare of the working classes: for Headlam, Christianity and Socialism were interchangeable terms, and he felt that Christians were obliged to tend to the earthly rather than the spiritual needs of the people. He earned the respect of a great many of his peers, including Ruskin himself. Headlam should be of interest to those researching the cultural politics of late-Victorian London, especially Ruskin scholars: in all of his actions, Headlam preached the gospel according to Ruskin.

Lawrence Roussillon-Constanty, “Beyond Proust: The Legacy of Ruskin’s Thought in France”

Marcel Proust’s translation of Ruskin’s works was the primary reason why the latter’s thoughts and writings crossed the Channel back and forth so easily at the turn of the last century. As recent research has shown, the Victorian sage’s silhouette also looms large in other, more remote quarters, from social politics to contemporary French art history. This essay retraces the critical reception of Ruskin’s writings in France from 1864 to the twentieth century, with a particular focus on art history. It then goes on to explore the way in which Ruskin’s aesthetic stance may have found new echoes in the art criticism of the eminent French art historian Daniel Arasse’s new “philosophy of art.”

Stuart Eagles, “”For Fear of Bears’: Ruskin in Russia (A Biblio-Historical Sketch)”

This paper provides an overview of late imperial Russia’s cultural engagement with Ruskin. Excluding Tolstoy and his immediate followers from the survey, it identifies the other translations and translators of Ruskin. It argues that in preaching a gospel of art in which beauty is held to be a social necessity, Ruskin suggested to key members of a broad creative élite, especially the Symbolist artists and writers of Russia’s “Silver Age,” strategies for connecting otherwise fragmented ideas in an increasingly divided, modernizing society. Ruskin’s vilification of contemporary Britain, and his celebration of a more harmonious and creatively successful past, simultaneously provided a stark warning of an evermore degraded future and offered new hope at the turn of the century that such a fate might be avoided in Russia. Ruskin’s ideas were also discussed among Russian political economists, architects, and supporters of traditional handicrafts. He was known to some industrial workers and was even hero-worshipped by a leading stage actress. Ruskin’s cultural presence in late nineteenth- and early twentieth-century Russia is almost completely unknown, and to recover it helps us more fully to understand both the history of this period of Russian culture, and the nature of Ruskin’s international influence.

Sara Atwood, “”The shadow, or the hope, of the hills’: The Victorian Mountain Experience”

The Victorian fascination with the Alps was rooted in the concept of the sublime, as defined by Burke and developed by the Romantics. The mountains aroused feelings of reverence for their spirituality and aesthetic beauty, while demanding a healthy respect for the dangers inherent in precipice and crevasse. Ann C. Colley, in Victorians in the Mountains: Sinking the Sublime (Ashgate 2010), argues that beginning in mid-century, however, adherence to the notion of the sublime began to weaken as mountain landscape – and the Alps in particular – became more accessible. Victorians in the Mountains attempts to account for this shift in attitude, exploring the social and political forces that drove Victorian mountaineering and examining the particular relationship to the mountains of three literary figures. This review essay is both a consideration of and a dialogue with Colley’s study of the Victorian mountain experience.